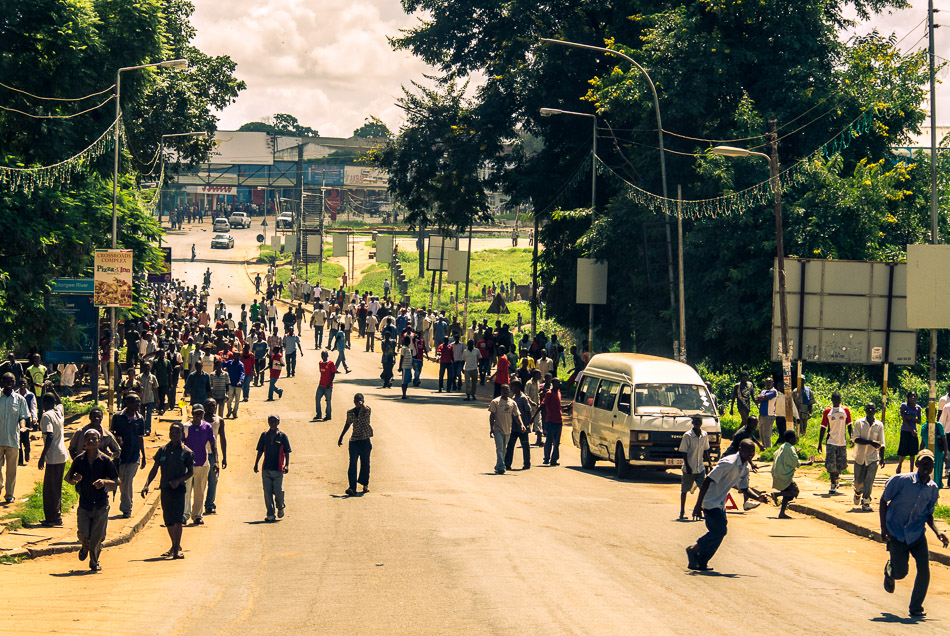 The woman behind the front desk, Olivetta, says there is violence in the city today. Police are clearing out the hawkers and touts from Kamuzu Procession Road — the main road toward the Capital City neighborhood — and people on the streets are reacting by throwing stones and resisting the police. “Don’t go there.”

I am headed to my meeting with Henry, spokesman for Malawi’s Ministry of Health. He’s been a great help in organizing this visit, but there are still some details we need to work through. I need a taxi to his office, but the front desk staff says the driver is afraid to go all the way to the hospital, along that contested main road, on account of the violence. A call to Henry confirms the directions – his office isn’t all the way to the hospital, and that it will be safe to visit. So I set out in the taxi, my driver avoiding the main road I had walked just last evening. “Yes boss,” he says, “no riots.”

We cross the bridge toward Lilongwe’s main market, now packed with people, and turn into the gated compound at the Ministry of Health offices, just off the main road (seen in the background of this photo). Henry and I plan the activities of next few days, with visits to hospitals and clinics, coordination with UNICEF Malawi, and meetings with government leaders. But after saying he would wait for me, an hour later, I emerged to find that my taxi driver had left.

Standing in the center of the compound with Henry, we hear the unmistakable sound of a large group of people, yelling and raucous. They’re nearby. People on the street started running, away from the main road. The Ministry staff quickly close the razor wire-topped gates and look out with a mix of excitement and trepidation. People come out of their offices into the compound to watch the commotion.

Henry runs inside to get his camera. I run to the fence and start shooting the passing crowd, until a Ministry guard asks me to stop: “The crowd will throw stones and damage the cars and offices. Please don’t.” My camera goes back in my bag.

A few dozen people pass. Amidst the noise and dust, it’s hard for Henry to tell if they want anything in particular, or are just up in arms about the police action to empty the main thoroughfare of vendors. We wait 10 minutes and the street clears. Calm returns. The volume declines. With my taxi driver gone, Henry says it will be safe to walk the 2km back to my hotel.

I set out beyond the gate and turn to cross the bridge. People stare. But people have been staring since I got here. Still, I don’t walk slowly. Reaching the other side of the bridge, I turn around when I hear the noise. Something set off the crowd I had just passed, 100m behind me. A few cars pass me, go over the bridge, then stop and reverse backward across the bridge, retreating from the cluster of people. I pull out my camera.

I look at a man on the sidewalk to my left. His eyes are serious. He motions up the street, his hand vertical, pointing towards my hotel, as if to say, “Go.” That’s enough. I start jogging.

I take a few quick shots across the bridge. Rubble litters the road in the distance. The crowd is moving in my direction, arms and voices raised. The last cars reverse off the bridge, and at the roundabout a few feet away, traffic has stopped. A few people start jogging away from the crowd, which is now moving onto the bridge. I cross the street, in the direction of my hotel, again stopping to shoot toward the ruckus.

Partially absorbed in my camera’s viewfinder, I hear the crowd shouting “UN! UN!” Then I notice they are pointing at me.

I start moving. Camera goes in the bag. I look at a car beside me as it pulls away and briefly contemplate the wisdom of opening the door and hopping in. Everyone here could be a taxi when there’s cash involved. The shouting grows. The crowd advances. People around me break into a run. I look at a man on the sidewalk to my left. His eyes are serious. He motions up the street, his hand vertical, pointing towards my hotel, as if to say, “Go.” That’s enough. I start jogging.