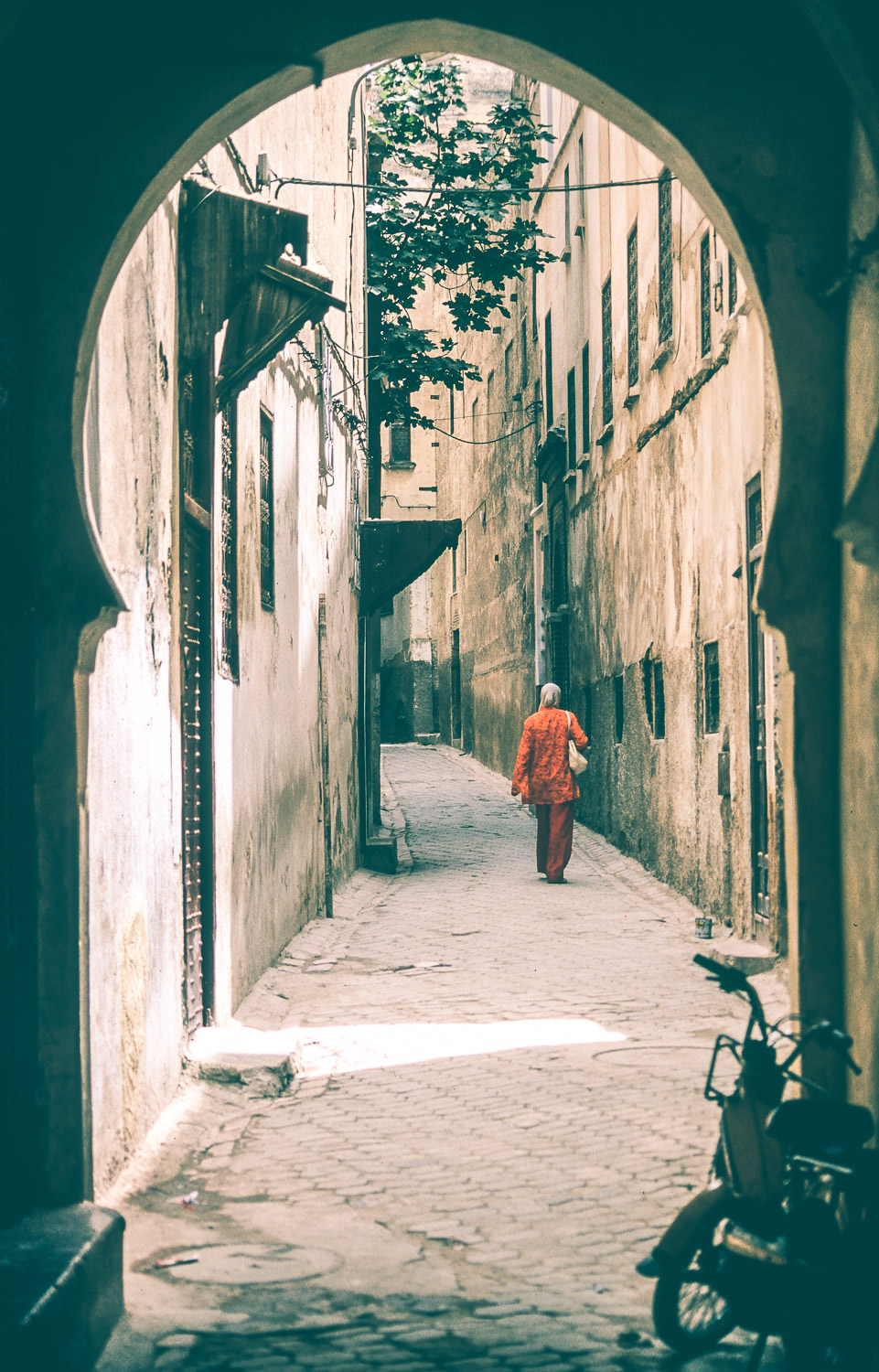 From our base in Meknes, a comfortable hostel with a walled compound and apricot trees in an affluent part of town, a day trip to Fes has only one target: the leather tanneries. Leather goods are ubiquitous in Morocco, with bags and clothes and shoes in a vast spectrum of colours. And most of them are crafted with leather produced in Fes. 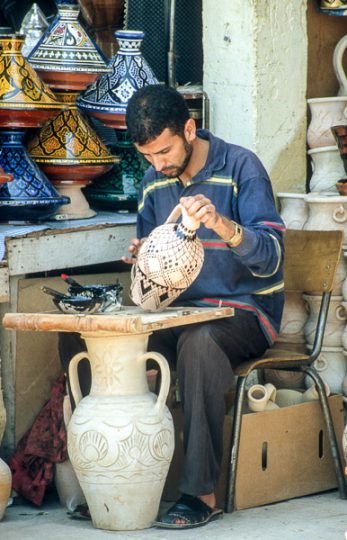 A 45 minute train ride brings us to the city. We’re traveling today with Steve, another Australian on another massive world tour. Much of his travel is funded by, amongst several other things, publishing stories of his time on the road — what an interesting idea…

At the walls of the Medina at Bab Bou Jeloud, one of the oldest city gates in Morocco, we enter the maze that is reported to define the souqs of Fes. The guidebook cites almost 10,000 tiny streets and alleys and ensures a hassle-laden trip with a never ending parade of “guides,” young and old. The peddling is especially intense. Joe turns the tables and tries asking them if he can sell them his stuff. “Let me guide you!” he tells one. Repeating a frequently received offer, “I have a magic box… with hashish inside,” he tells another. “You want? Best quality!” When all we get are looks of befuddlement, Joe tries responses in Spanish. Except that the first guy speaks Spanish better than Joe.

When the next kid to offers me a tour, I use my Japanese to recite Isshin-Ryu Karate basic technique number five. “Gedan barai seiken gyak tsuki,” I say, enthusiastically describing a downward block and reverse punch.

I try responding in Japanese: when a young boy asks if I want a guide, I start counting “Ichi, ni, san, shi, go…”(One, two, three, four, five) but I don’t get to six before he shouts that I’m crazy and runs away, laughing with his friends. Not two minutes later, when the next kid to offers me a tour, I use my Japanese to recite Isshin-Ryu Karate basic technique number five. “Gedan barai seiken gyak tsuki,” I say, enthusiastically describing a downward block and reverse punch. Bewildered by the disconnect between my face and the language coming from my mouth, he, too, turns and runs. Here on the mean streets of Fes, all those years of martial arts training really pay off when you least expect it.

The only trouble with refusing guides in Fes is that after an hour of wandering the streets in search of the tanneries, we actually needed a guide. In the labyrinthine corners of this ancient city, there is simply no way for us to navigate successfully. We’re lost. Our maps useless (or our ability to decipher them is useless, rather), we decide to take the plunge and pull out some coins in preparation for the next kid who approaches us. We don’t wait long.

He looks too young, probably no older than seven. Does he really know the route to the tanneries? We have no idea, but the odds are more in his favour than in ours. So we give him three Dirham ($0.30) and he’s thrilled. Promising us amazing and otherwise unavailable views of the tanning operation we follow behind. His pace quickens and we have a suspicion he’s trying to ditch us. 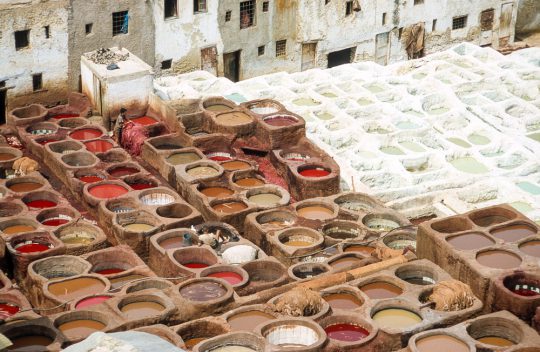 We round another corner and he’s waiting right there, quietly telling us that he needs to be careful — the police in Fes are on guard against unlicensed guides and his penalty for our tour is probably severe. He tells us that he’s going to walk ahead of us and we’re to continue taking the straightest path we can walk — there is no truly straight path here but we understand his meaning — and he’ll rejoin us when it’s clear. We don’t figure we’ll be seeing him again, but we press on. A hundred meters later, he whispers at us from an open door of a narrow stairway. We look up to see a sign to a leather shop. But it says there are views of the tanneries, so we figure he’s delivered us. Mustering all our ant-haggling skills to rebuff the onslaught that surely awaits us in this store, we climb the stairs.

The third floor shop is beautiful. It smells like pristine leather. And it’s got an incredible view of the tanneries below. The dense residential area has opened a hole of production in its center, with terraces and rooftops overlooking the scene like they are skyboxes in a stadium of manufacturing. The guidebooks warn us of the tanneries’ noxious smell of sulphur, but despite seemingly full production, we don’t smell a thing. In a sea of large concrete tubs, with dyes and acids to impart colour to the hides, boys drag the hides from one tub to the next. There are rich reds and oranges in one section and a distinct zone that contains only white tubs. The process looks complicated and in our zeal to take pictures and escape before being pressed to take home an entire large animal worth of leather goods, we don’t seek the details of production. We do look around, however, and everything looks great. But none of us are in need of yellow purses or green duffel bags, and while they’d make great gifts, none of them are light and our backpacks are heavy enough. We explain our predicament to the shopkeeper and offer him 10 Dirham apiece for letting us take in the view. He seems very grateful and offers us a heartfelt welcome. No sales pitch, no haggling. We’re thrilled.

I claim no sophistication to my beer-sampling palette, but on this evaluation there is consensus amongst our group: terrible.

Back in Meknes, we celebrate our day with a trip to a bar. In the Muslim world of Morocco, bars are typically off-limits for Moroccans. Regarded as the sole domain of drug dealers and whores plying amoral customers with blasphemous contraband (also known as beer), there are not many bars to be found and the ones we have seen have been rather unwelcoming and almost empty. But Steve has made a comprehensive investigation and promised beer and popcorn. The 1980’s-vintage pinball machine is an extra surprise.

Despite the prohibition on alcohol here, Morocco does have its own beer: Flag. I claim no sophistication to my beer-sampling palette, but on this evaluation there is consensus amongst our group: terrible. But after two weeks without a drink, it still tastes so good. The concept certainly makes for interesting marketing: “This stuff is horrid, but hey, got any better options?” We have a few, take some photos and prepare for the final stretch northward.