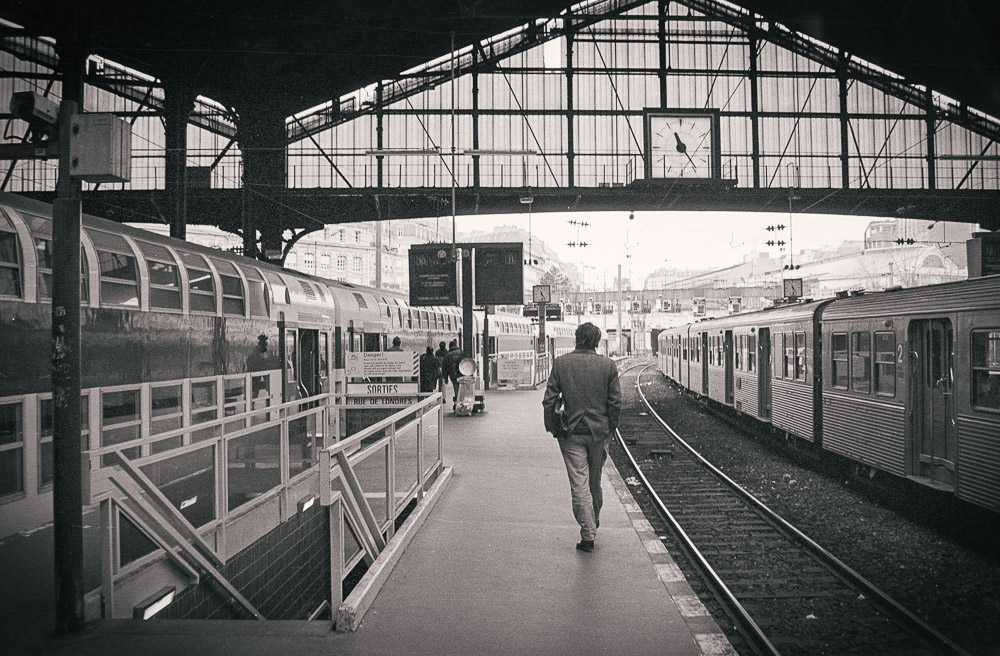 Alight drizzle coats the back of the camera hanging around my neck. Released from the steel gray sky, the tiny drops aggregate on the plastic as I stand lingering, idling amidst the ebb and flow of travelers. A stiff, cold breeze abruptly enters the mix and the reaction is instantaneous amongst the crowd: scarves get wrapped tighter and jackets get zipped up higher and gloves are pulled more snug. There is a hum in the air; the sound of purposeful and efficient travel, uninterrupted by the cacophony of loudspeakers and food vendors and direction-seekers. I am engulfed by a perpetual flux of human traffic, dutifully marching along familiar trails.

On this February morning, I cannot say what has brought me to Paris’ St. Lazare train station. Minutes ago I was riding the Metro, attempting to savour my dwindling time in France by visiting another one of the city’s unparalleled museums. Then I changed my mind. I wanted to take pictures. Reversing course, I exited the train at the next station, crossed to the platform heading in the opposite direction and returned to the heart of Paris. Coming from the southeastern fringe of the city, it’s taken some work to efficiently navigate the unfamiliar labyrinths of corridors and interchanges of multiple train lines to get to St. Lazare, but something about seeing this famous station just seemed right.

The cars empty and the people push on into St. Lazare’s main building and onto other trains and into their own worlds and only seconds later, I am alone. The platform is empty again.

Groaning to a halt on the track beside me, the doors of a regional train burst open and its eager occupants surge out into the station. Briefcases swing, backpacks are tossed over shoulders, leather-soled shoes click against the concrete quay. The cars empty and the people push on into St. Lazare’s main building and onto other trains and into their own worlds and only seconds later, I am alone. The platform is empty again. It’s cold. The skin on my hands is dry, red and cracking. 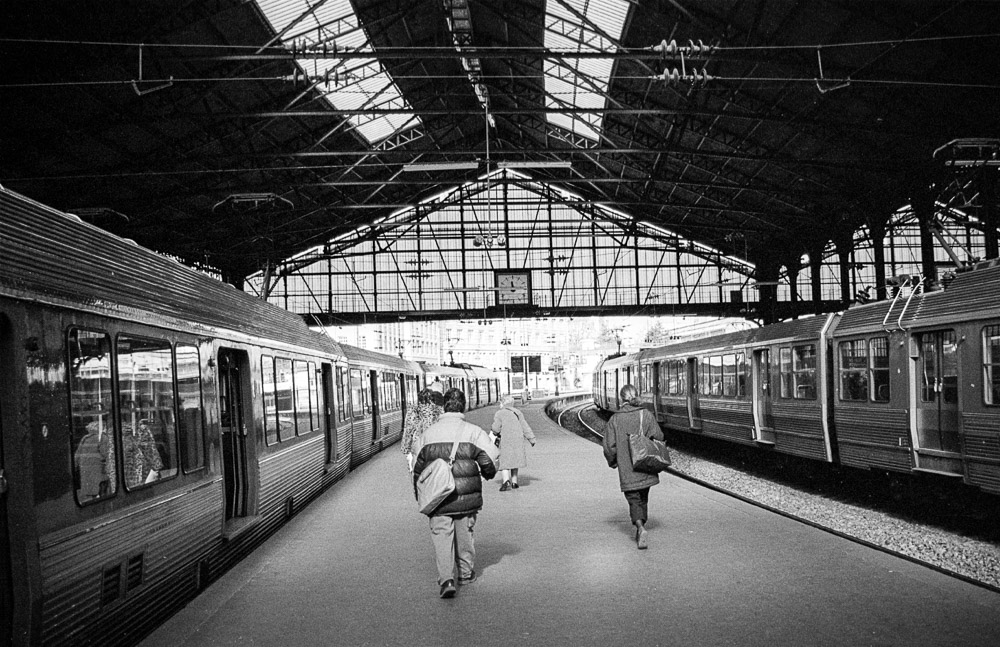 Under the protection of St. Lazare’s mammoth vaulted canopy, I turn to look back at this hundred-plus year-old robust beast of a train station, its girders dark with the grime and soot of millions of departures and arrivals gone by. For all of the steel here, both in this colossal building and in the trains it houses, nothing offers travelers more strength than the windows, standing in such stark contrast to their structural iron counterparts. Even on this dull and rainy day, the windows afford a soothing illumination to the space they shelter. The light is soft and subtle with the gentle quality of a sort of photon care package, delivered to the swirling masses transiting the cold concrete and rails below. While further reaches of the station remain shrouded in shadow, St. Lazare is simultaneously well lit and mysteriously well hidden.

The shots come quickly. Easily. Like a script waiting to be read. I move up and down the platforms, following the crowds, and it seems strangely effortless.

Another surge of travelers begins to move down the platform and onto an awaiting train. I start to take pictures. Something about the scene speaks out to be captured and my camera is drawn up to my eye. I walk and shoot over shoulders. The shots come quickly. Easily. Like a script waiting to be read. I move up and down the platforms, following the crowds, and it seems strangely effortless.I shoot crouched down amidst briefcases and flowing coats and scampering dogs. I hold the camera high above my head and squeeze the trigger, hoping to capture a piece of the fleeting migration.

I had fought for motivation to take pictures on this trip, but the frames fly by now, almost as fast as my camera’s motor drive can pull the film from its spool. Under the covering of the steel and glass I fire away, and up against trains and walls and terminal and back out into the rain again. The crowd tapers as a final few stragglers hop aboard the departing train beside me.

Then I hear it. I hadn’t noticed any music before; perhaps there wasn’t any, I can’t say for certain. From speakers hidden high above, the soft, luxe sound of Elvis’ “Love Me Tender” wafts its way to my ears on the platform, newly deserted again. In this strange confluence of space and time, alone on a cold strain station platform with a camera and an easy, mellow song, Elvis offers the soundtrack to crystalize an abstract sense of worldly correctness.

I had fought for motivation to take pictures on this trip, but the frames fly by now, almost as fast as my camera’s motor drive can pull the film from its spool.

I turn two full circles and just look around. There’s nothing particularly remarkable about the scene or the song. Witnessing Paris’ morning commute — transiting workers, lovers and tourists — is hardly an epic event. Time seems to slow and perception seems to shift, affording me a different and newfound appreciation of the average and mundane. All is well. And for no other palpable reason than because it is.

I don’t know how long I stand there, taking it in. A minute, maybe two. A strange, warbling horn shrieks out behind me and an illuminated red neon sign warns of a train’s imminent departure. I take a final photograph.

Reaching St. Lazare’s main building, I turn to face the tangle of tracks and wires disappearing into the urban fringe of northern Paris and points beyond. The clouds have become thicker and more imposing and light has dimmed. More train doors burst open and another human tide rolls in, where successive waves are inherently different yet very much the same. Elvis gets drowned out by the ambient thrum of the teeming masses.

I stuff my camera into my bag and my hands into my pockets. St. Lazare grows a bit colder and a bit more gre. And just like that, as I break for the turnstiles of the Metro, these very strange and stark few minutes are over like a train door slamming shut before departure.

Days later, at home in my darkroom, in a bumbling act of photographic self-destruction, I make a catastrophic mistake and ruin all but fifteen frames from St. Lazare. Through the haze of anger, I come to see it as equally unique and somehow part of the whole experience. In five years of darkroom work, I had never destroyed a single roll of film, let alone committed such a grievous and terminal blunder with my travel photographs. Perhaps I had just been careless, too used to my routine. Perhaps the law of averages simply caught up with me and I finally made the rookie fumble I should have got under my belt years ago.

Photography, whether moving or still, merely captures fractional moments and attempts to assemble a narrative. A viewer can see the resulting photos, their subjects and context, and have any range of emotive reaction. But only the photographer is behind the lens when a photograph is taken and no one else can share either the photographer’s precise perspective or singular experience of acquiring that image. And it is equally true that photos never capture everything, regardless of how technically thorough the imagery.

Of his time in Paris, Jack Kerouac wrote of “an illumination of some kind that seems to’ve changed me again.” The experience, he said, was “a Satori: the Japanese word for ‘sudden illumination,’ ‘sudden awakening’ or simply ‘kick in the eye.'” After my time in Paris, it would be easy to be upset at the lost shots from such a strange experience at the train station.

The experience, he said, was “a Satori: the Japanese word for ‘sudden illumination,’ ‘sudden awakening’ or simply ‘kick in the eye.'”

Yet perhaps my lapse in darkroom technique served to ensure St. Lazare’s special tangle of tracks and trains only ever fully resides in my own tangles of neurons. Viewing the remaining unaffected photos of the scene places me as the photographer in the unfamiliar position as an outsider viewing a picture, knowing there is more. The sudden illumination is mine alone.

While there are no more photos I can present to recount the experience, there is more to the satori. And those intensely personal and unique minutes on St. Lazare’s platforms will only ever belong to me, residing far out of the reach of enlargers and scanners and web browsers. I’m fine with that.