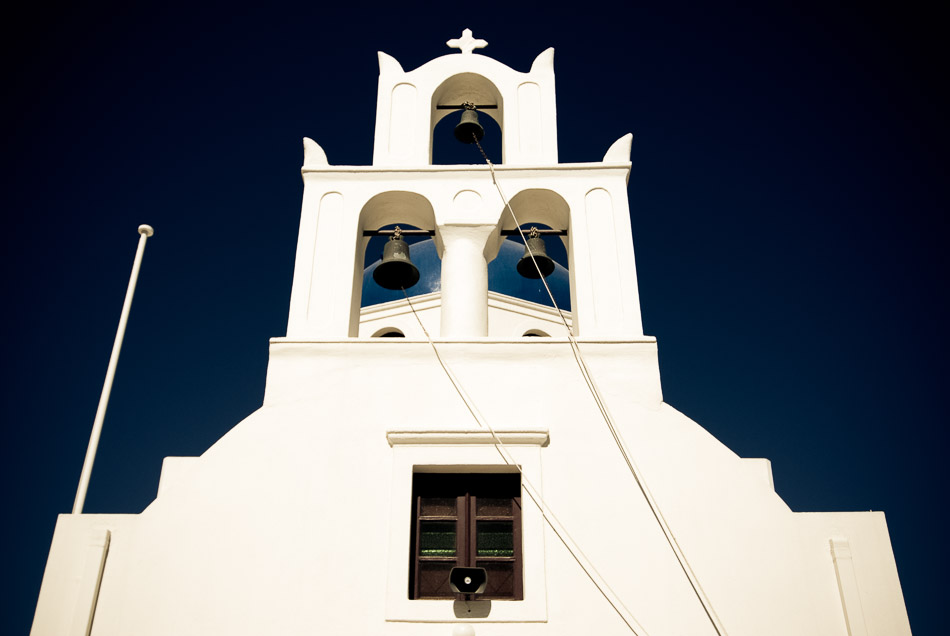 I awake to long blasts of the ship’s horn. Figuring the ferry is pulling into one of the first stops, I grab my camera and head above deck. Expecting to see Ios or Naxos, I instead recognize the rock walls and caldera of Santorini, the last stop. Passengers are pulling luggage through the halls and toward their cars on the vehicle deck. A family is applying suncreen at the stairs to the exit. It’s not yet 8 am but I’m not the only one salivating for gyros on shore.

It’s great to be back. I give my bus fare to the same guy I’ve been giving it to for years and watch out the window as we climb the narrow switchback road up the cliff face. You can always spot the first-timers with their cameras bouncing against the glass, their eyes wide at the sheer drop to the water below. But the view this time yields something different and tragic: The giant circle of an oil spill containment boom. In April of last year, a 500-foot cruise ship with 1600 people aboard struck rocks here and sunk just feet from shore. All but two passengers escaped, in what was a very public spectacle seen by thousands from balconies and cafes in the town above and broadcast online. Passenger video of the evacuation s howed just how close the ship was to the cliff wall before being towed off the rocks and into the caldera, where it sank later that evening. The location of the spilled oil leaves no doubt about the initial strike — the ship was very close to the caldera wall, but just below the surface, the wall wasn’t as vertical as expected.

The subsequent investigation would reveal a discrepancy between the actual location of underwater rocks and what was shown on the official navigational maps. The ship struck rocks that were not on their charts. But nonetheless, why would anybody bring a cruise ship that close to a volcanic cliff?

The bus unloads in Fira and I make my way into the main square. I guess I should find a place to stay for a few days.

It’s busy. There’s hustle. Bustle. Bling, even. Outdoor cafes are full. Music is playing. Traffic is so dense that police are directing. I walk up the street, with an interlude at the amazing bakery, and deposit myself in the office of a family-run hotel that was a perfect fit on my previous visit to the island. I’m back.

The next few days embody vacation. A true retreat. Reading on the beach. Photography. Scuba diving. Eating a half dozen gyros a day. Yet Santorini has taken on a different character. It is an island fully in service of the cruise ships that now call here daily. The narrow streets of Fira are awash in jewelery shops, display cases of gleaming watches, souvenir trinkets and “Minoan” art. Big dollars. Big flash and big flare. And when the cruise ship-of-the-day departs, the real island returns.

I think back to my first visit to the island in June of 2001 and the white-knuckle bus ride from the port, standing jammed into a rickety, hand-me-down bus from western Europe. The island has seen much prosperity since then, in what I suspect is another example of the Olympic investment paying huge dividends. There were barely any backpackers here in 2001, all staying in the cave-like hostel north of the main square. Sometime after 2004, the hostel was bulldozed to make way for more shopping, and a local law was passed to prevent the construction of its replacement. Seven summers after my first visit, the only backpacker-oriented accommodation in Fira is a campground. They only seem to want the higher end tourists now and the fistfulls of dollars they might bring. When such a rising tide raises all the boats, it’s hard to blame them. But still, power to my backpacking people.

After a few days of exquisite relaxation, with weather beginning to change in Europe, I book a cheap flight from Crete to Prague and plan to bring an end to this little sunny detour.