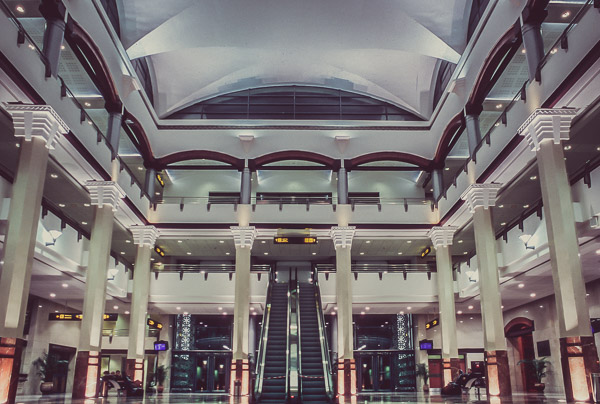 I was in the line to visit the ship’s Moroccan immigration officers when I noticed the guy in the line beside me. He looked, well, Moroccan. And in his hand was a Canadian passport. After reading wild tales of hucksters and scam artists, I was keen to know if the ship’s currency exchange rate was decent — I’d happily change my hundred or so Euros aboard the ship rather than wait for the unknown in Tangier. “Hey, are you originally Moroccan?” I asked. He smiled and said yes, but explained how he now lives in Calgary.

I pointed to the nearby exchange booth and asked him what he thought of the rate. “It’s good — you should definitely change your Euros.” I thanked him, got my first Arabic-language passport stamp, exchanged my cash and returned to where Joe was sitting. We had our guidebooks out, strategizing over our itinerary.

In about seven days — we both had lots to see on our summer trips, so the luxury of leisurely meandering was not one either of us could afford — we would go from Tangier to Casablanca, then eastward to Meknes and Fes before returning to Tangier. It was a quick trip around the northern region of the country, but according to my guidebook, if you see Casablanca, you’ve seen it all and there’s no need to visit Marrakesh.

I glanced up to see the Moroccan-Canadian from the immigration line. He had a tentative smile on his face as if unsure if he should approach us. Our books had already warned us to have our scam detectors set to maximum sensitivity, but I said hello. Hatim introduced himself and asked if it was our first time visiting Morocco. He didn’t want to impose but had seen us looking at our guidebooks and thought he might offer us some suggestions and tips on seeing his home country. These books miss so much, Hatim said, and he wanted us to see his amazing and fascinating land the way it should be seen and enjoyed. We welcomed him to sit down.

45 minutes later, almost nothing about our itinerary was the same. Our new tour guide was the real deal. The overhaul began with our initial days in Tangier being scrapped for an overnight train directly to Marrakesh. With Hatim’s advice and suggestions about fascinating destinations our books glossed over or simply failed to mention, we would stay longer than we originally intended. Much longer. We would see mountains. Beaches. We would go further south. Further off the beaten path. Further, we hoped, into the real Morocco.

We would stay longer than we originally intended. Much longer. We would see mountains. Beaches. We would go further south. Further off the beaten path. Further, we hoped, into the real Morocco.

From the second we leave the gates of the ferry terminal in Tangier, we are enthralled with this new land. On Hatim’s advice, we walk a few hundred meters beyond the hucksters crowding the ferry terminal entrance and hail a cab to the train station. The taxi’s windows are open and the little car is successively filled with a barrage of new smells as we work our way through the city — some the result of sidewalk cafes, others of the diesel fumes of the busy shipping terminal. In the dusty, thick air, the headlights of our tiny, battered blue Peugeot finally swing onto the palatial train station. A brand new building, alone in an open field and far removed from the heart of Tangier, its gleaming opulence stands in striking relief to much of what we’ve passed. A stream of people flow toward the main entrance, some carrying suitcases, others with battered cardboard boxes, some traveling alone, others with many youngsters in tow, all presumably bound for points southward.

Upon arrival, our cabbie demands one Euro more than we’d bargained for, insisting the impromptu price increase of 50 percent is actually what we’d actually agreed upon back at the ferry terminal. We’re correct, but we don’t care. It’s one Euro. We’re in Morocco. We can’t stop smiling.

With train tickets in hand ($27 for a First Class sleeper on a 600 km trip), we find benches and get ourselves together for the overnight journey. In fact, it’s my farthest overnight train trip and my first time paying for a sleeper. We talk about the sights that await us over the next few weeks, but the smell has us distracted. A station restaurant is churning out some of the most delectable-smelling pizzas in my memory. And at $3 for a seafood-topped behemoth, I inhale it all. It is amazing.