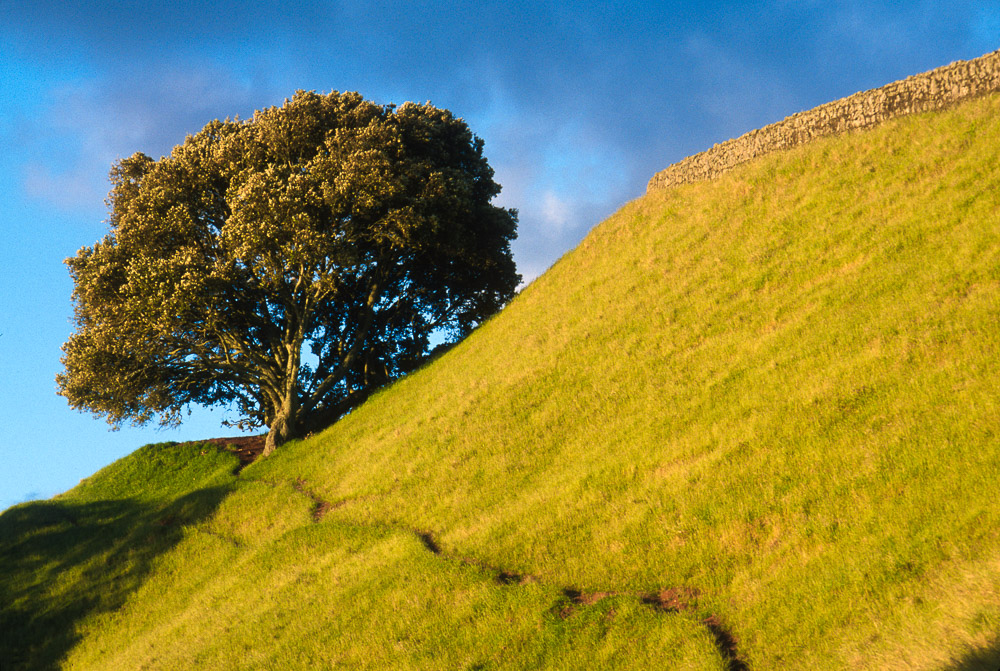 Inormally begin a trip recounting the items, often essential, that I’ve forgotten. And while this excursion isn’t without a few minor wayward objects, the major gear is all with me. As the days tick by, however, I’m now progressively losing stuff. At this rate, it’ll be me and whatever I can stuff into my pockets for the ride home. 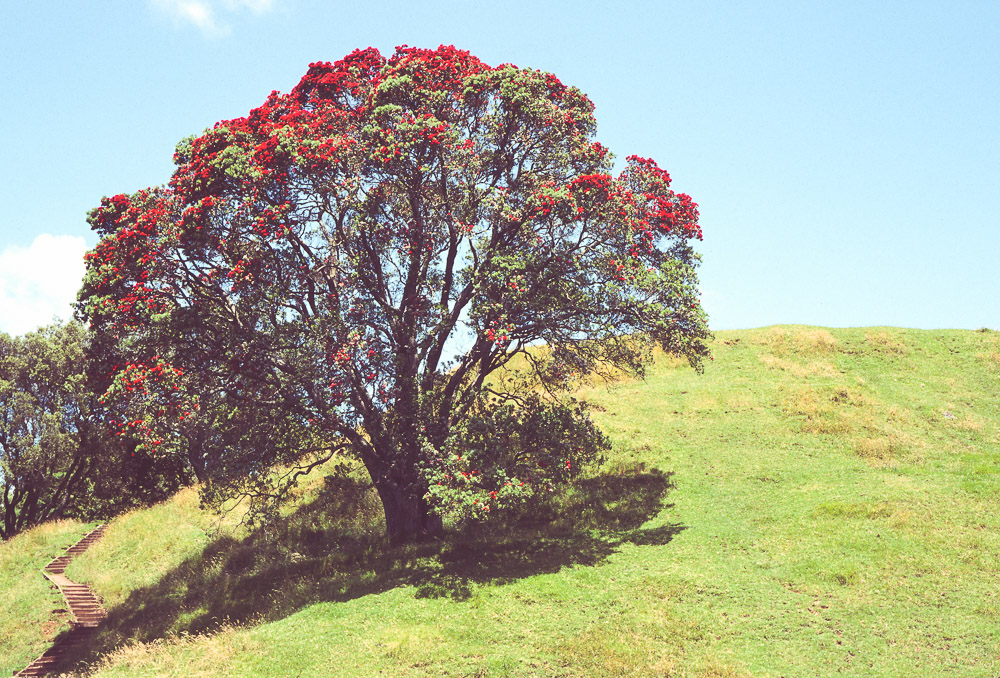 Those of you who have tuned in to past excursions know that I’m used to dog crap. Paris has steeled my nose — if not my shoes — to the way of Le Turd. You don’t have to keep an eye out for any doggy deposits in Auckland, however. Because you’re too busy watching out for sheep droppings. And cow paddies. And other very mysterious looking things that surely came from the business end of some grazing animal. I’m not an expert (yet), but I’m guessing it’s from the numerous chickens that also wander around Auckland’s parks, waiting to be sauced and barbequed.

The city is filled with parks. Beautiful ones. On hills. In valleys. Atop dormant volcanoes (some 25 of them in the city alone). Around monuments. Anywhere there’s not a bank or a sushi shop or a souvenir shop, there’s a tract of green grass with palm trees. But these parks are filled with animals. “You have experience in one of these, right?” “Oh yeah,” I lie. “It’s been a while, but I’ve done it before.” “Well alright, mate, have a go!”In a country where the sheep to human ratio is 20:1, animals are given such regard that they may as well have bus passes and library cards. 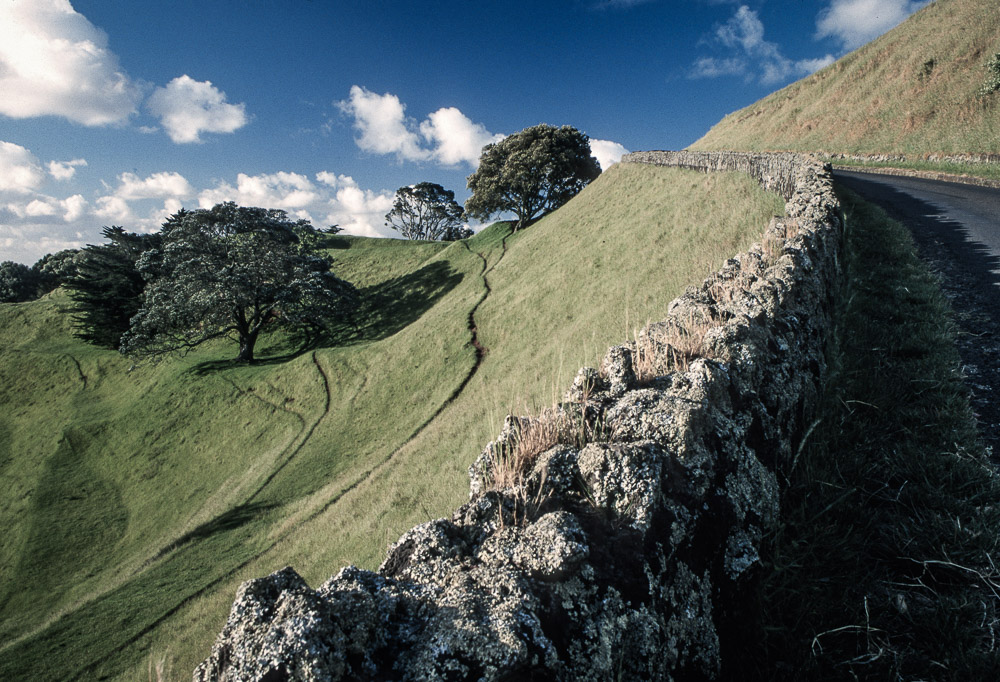 Scatological experiences aside, Auckland was so nice that I left after one day. After watching the sun go down on One Tree Hill (of U2 fame but without the tree, however, which was hacked down a few years ago by a local nutjob) I began the next morning by heading to a little island paradise, courtesy of a tip from the hostel travel desk. Waiheke (“why-hee-key”) island is only a 45 minute cruise from downtown, but it may as well be alone in the South Pacific. Waiheke is to Auckland what Santorini is to Athens.

The first hostel I tried had been closed and vacated, so I hitchhiked (yes, a first) to a second, more remote hostel with a spectacular vantage point. I checked in. 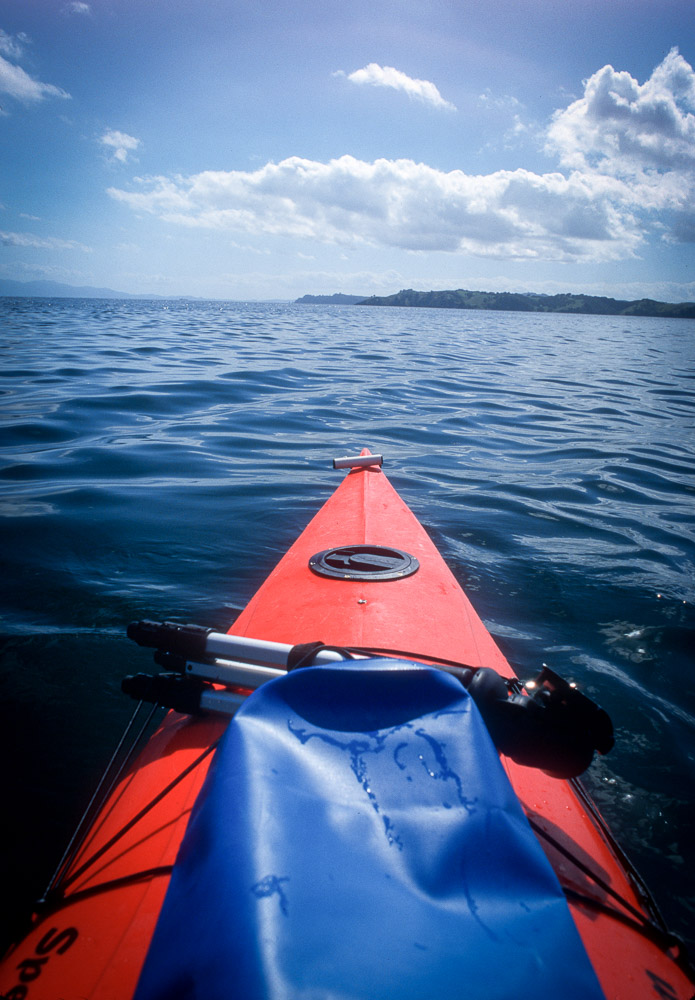 I plan to spend my morning kayaking around this slice of paradise. I haven’t kayaked since Greece in 2001, when I rented a boat that was only slightly larger than an inner tube and with sim ilar handling characteristics. So years later, I figure I probably know how to get by. Until the rental guy brings out some kind of big, serious boat with a rudder and spray skirt and other assorted gizmos for me to break. “You have experience in one of these, right?” “Oh yeah,” I lie. “It’s been a while, but I’ve done it before.” “Well alright, mate, have a go!”

I carry the bright red boat down to the beach and put on the spray skirt. Thankfully, there’s nobody else on the beach for hundreds of meters. The rental guy is undoubtedly watching me from his window as I clumsily attempt to handle the big red kayak. I secure my camera gear, protected in a new dry bag, to the hull and tug the boat out into about three feet of water. I lower the rudder and point north into the bay. A break in the surf lets me hop into the kayak, as quickly and smoothly as I can.

Easy does it. Don’t wobble. Straighten out, aim into the waves. I dip the paddle a little deeper. One, two, three, four strokes. I’m moving. I look up to see a wave coming in. Five, six, seven and I pull a little too hard on the left side. My weight shifts. I’m leaning. Sliding left. Farther. Past the point of no return as another wave hits. A doom-laden thud as it connects with the hull, flowing over the nose of the kayak. Like in slow motion, I see my tripod and a whole lot of camera gear start to swing over the left side. The last thing I think of as I’m rolling under are the olympic whitewater rafting competitors who right themselves without missing a beat or a gate. I’m no whitewater racer. Upside down and in relatively serious trouble, I unseal the skirt, pull it away and push out of the kayak and up to the surface. Breathe.

The last thing I think of as I’m rolling under are the olympic whitewater rafting competitors who right themselves without missing a beat or a gate. I’m no whitewater racer.

My camera gear held to the boat.

My $15 dry bag and $2 caribiner saved the day and kept a couple thousand dollars of camera gear dry. I’d clipped the bag to an X-shaped bungee cord on the top of the hull. The tripod was less secure, connected by a nylon strap. They both swung free and went underwater with me, but as I righted the boat, I saw they had stayed anchored. Only in waist-deep water, I gently climb back in, certain the rental guy is taking notes. 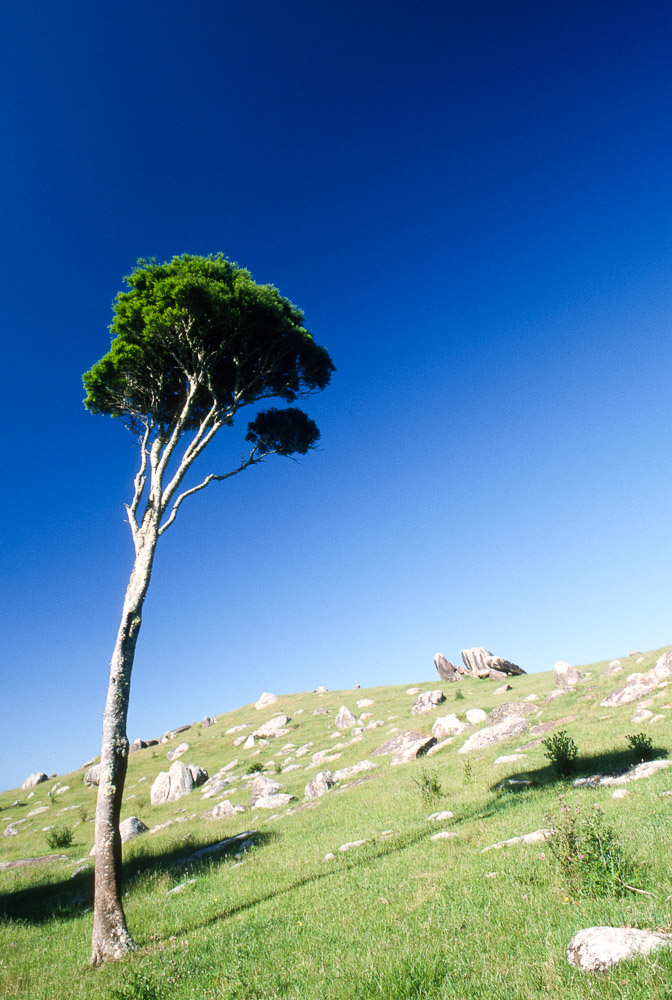 Now sitting in a couple inches of water in the kayak, I re-secure the spray skirt and move northward into a deeper part of the bay. I don’t dare open that bag. Paddle, paddle, nice and easy. Beyond the breaking waves near the shore, the bay is calm. Which is good because I have to teach myself how to operate this damned kayak.

It wasn’t until after another half hour of (spill-free) paddling that I realized I’d lost my Oakley glasses in the debacle.

And then the penguins showed up.

After a day of intense driving that has me feeling prepared to enter next year’s Paris-Dakar rally, I am chilling out, drinking. The average single North American car lane is as wide as entire two-way streets on Waiheke Island. And many roads are “unsealed” (gravel), with some having a just narrow strip of gravel shoulder before a several hundred meter drop to the ocean. And roads are driven on the opposite side. And at especially tricky segments of highway, there are comforting signs with things like one big red exclamation mark. It’s that kind of place. Not dying was my accomplishment for the day.