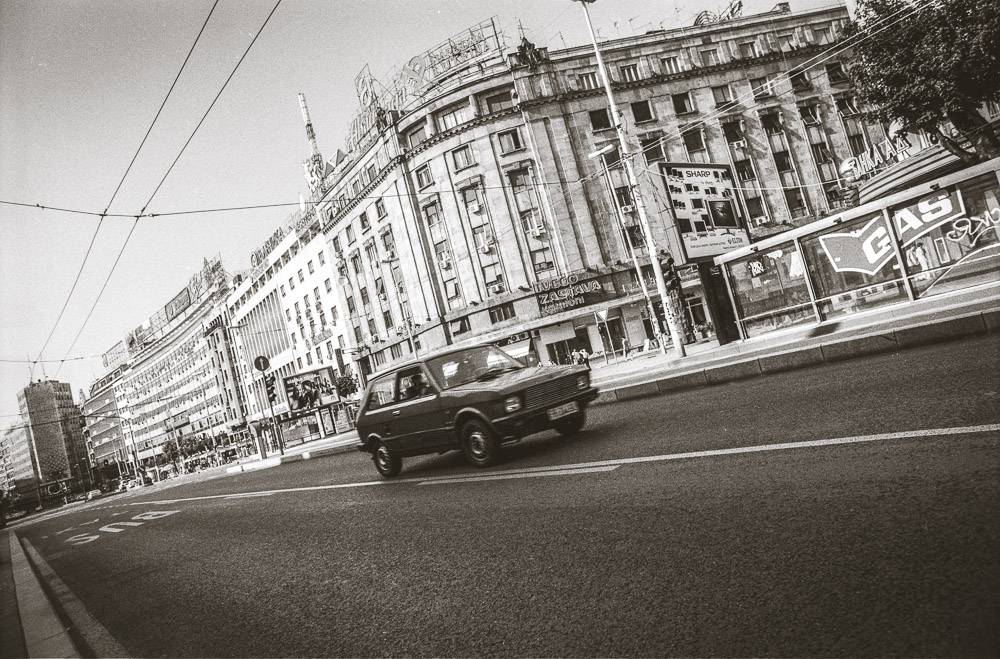 The first bombs fell about 10 pm. Their arrival was no surprise — journalists left the city two days prior. Residents gathered in Cold War-era shelters as the air raid sirens wailed and radio reports warned of the need for gas masks. The state-run television station blinked out. Explosions erupted around the city and the lights went black. Over the course of a few hours, key military and governmental installations here and around the country were struck by cruise missiles and satellite-guided bombs from stealth aircraft. In the morning, the city awoke to investigate the decimated hulks of warped steel and shattered concrete and fire-scarred trees. 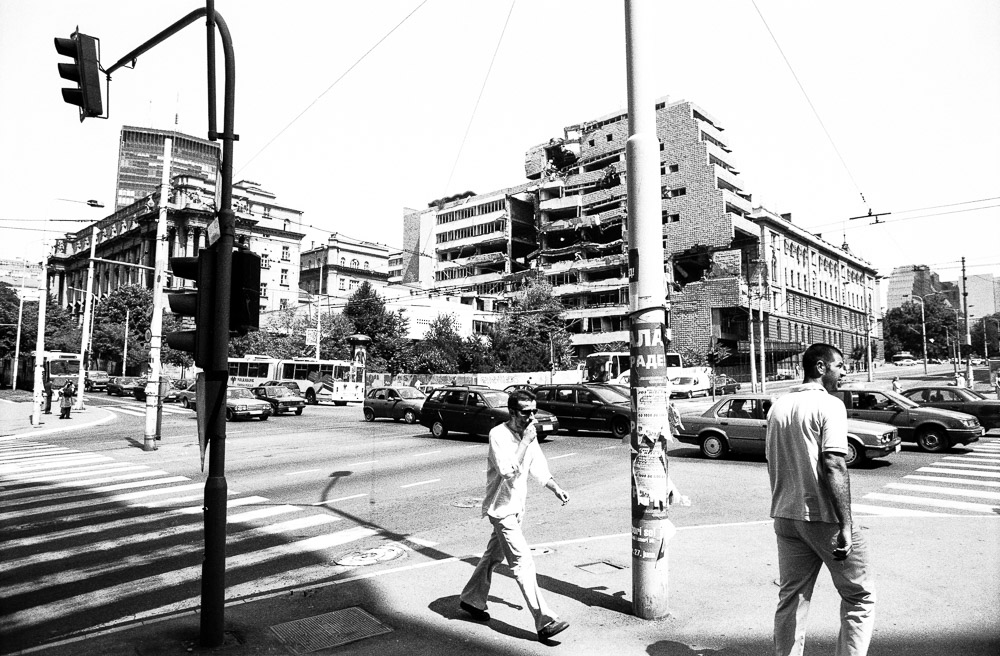 That was five years ago and here now in Belgrade, much has changed. This is a capital city in transition.

That was five years ago and here now in Belgrade, much has changed. This is a capital city in transition. It is dirty, it is polluted, it is leaden with communist-era monstrosities of architecture: veritable odes to plainness, executed with unwavering zeal for copious amounts of gray concrete. But the economic engine of change is turning, albeit slowly, and moving Belgrade and Serbia toward economic and aesthetic prosperity of other European capitals.

Like the ruined military buildings that still dot the city, cultural attitudes here, amongst a few young Serbs I spoke with, could still use some renovating. Talk of NATO — which launched the 78-day bombing campaign that would ultimately, yet belatedly, halt the genocide in Kosovo — or the Clinton administration brings harsh words of ridicule. The cruise-missile-installed air conditioning of buildings around town — many still unrepaired and crumbling — is still much despised.

“We are only five percent of the population there and this is what they do to us.” Did it matter that the Serbian five percent, with a brutal iron fist of repression, managed to largely exterminate an entire race of people? “They need to go somewhere else.”

“Look at what the Albanians are doing to us and our country,” Katrina, an economics major at Belgrade University working at the hostel, told me. “They’re making Serbs live in ghettos in their own cities,” referring to Prishtina, in Kosovo, where under protection of NATO, the ethnic Albanians have begun to rebound.

“We are only five percent of the population there and this is what they do to us.” Did it matter that the Serbian five percent, with a brutal iron fist of repression, managed to largely exterminate an entire race of people? “They need to go somewhere else.”

And what of Slobodan Milosevic, the man who brought the term “ethnic cleansing” into everydaylexicon? He’s hated in Serbia not because of his brutal atrocities but because of the fiscal ruin he brought to the country. “We are poor and had corrupt government because of him and I am glad he is gone,” said Katrina. That he ordered the killing of tens, maybe even hundreds of thousands of people was not even a factor in her dislike.

And as Slobo now stands trial in The Hague for various Crimes Against Humanity, his wife still lives just south of central Belgrade, refusing to move out of their official residence. Rallies in support of her husband still draw loyal thousands. I wandered the streets of their residential neighborhood, recalling televised scenes of both protest and backing for the former ruler.

It is in this neighborhood that the Historical Museum of Yugoslavia resides, near the grave of Marsal Tito, the revered Communist Party leader who controlled Yugoslavia after WWII. Here, the houses are large but the lawns are unkept and cluttered with foliage and assorted detritus. The park looks like a jungle. Kids bike down the dilapidated and cracked streets, past the armed guards with Mrs. M inside. In fitting allegory, an abandoned and rusting Yugo sits on the street nearby. Regular people, presumably, live in this area, too, and I’m curious to know what happens when their kids hit a baseball into the backyard of a brutal dictator. Foul?

The Historical Museum is open but deserted and spray-painted graffiti covers the steps and sculptures. 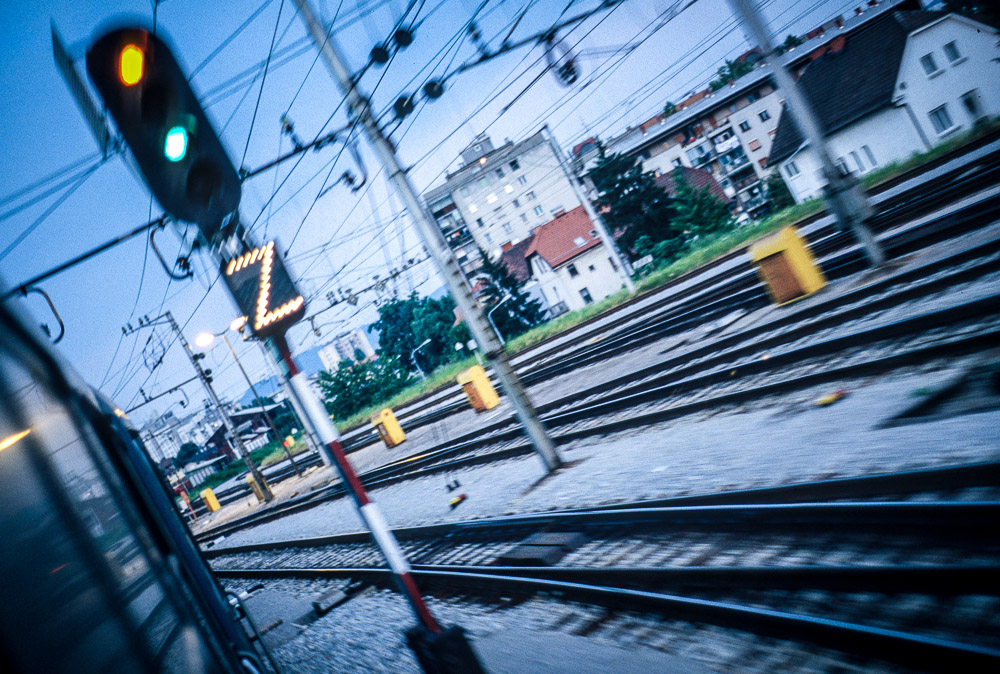 Weeds grow high around the walls and fences and between the cracks in the sidewalks. At the entrance to Tito’s park, a soldier is asleep, leaning back in his chair.

Alone in the park, I wander through the gardens and into one of two mini-museums on the quietgrounds. A U-shaped collection of glass cubicles, most of the contents of this strange building is hidden from view by dark curtains that cover the floor-to-ceiling glass facades. It’s a bit like walking into the fish section of a pet store, but the contents of the glass boxes remain obscured. The one section with its curtains drawn is left open for more than display. An open and unguarded door leads to a re-creation of Tito’s office with its plush carpet and rich burgundy hues. I look around the building and check outside the front door. I am still alone. The opportunity is unparalleled. I enter the room, sit at Marsal Tito’s actual desk, in Marsal Tito’s actual chair and proceed to order the invasion of my lunch.