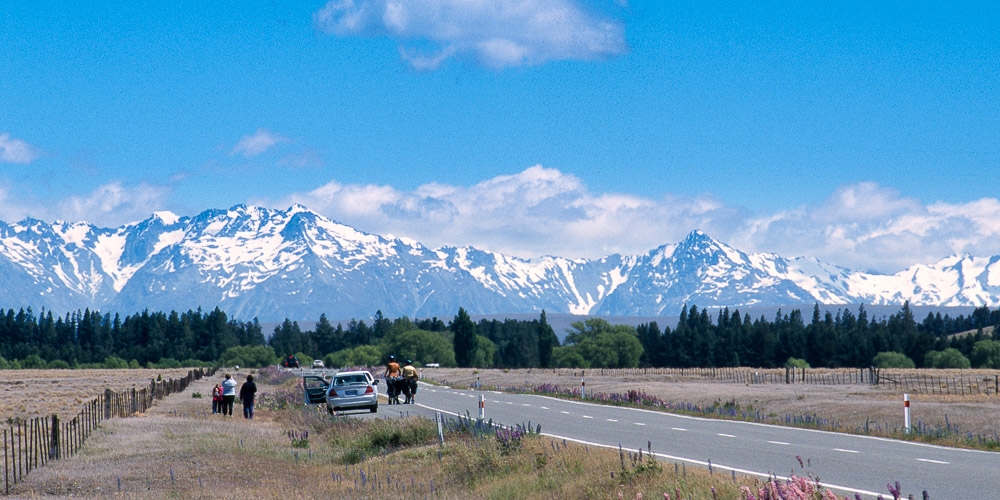 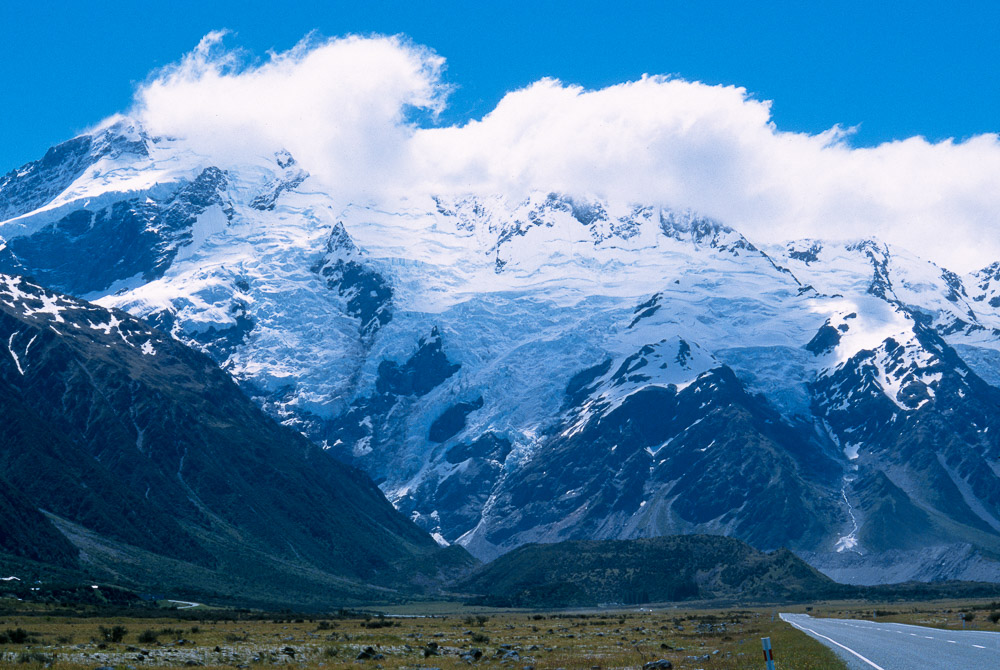 through low, grass-covered hills, we swing around a bend. The road stretches out across a massive plain of grass and flowers and sparse trees, sliced in two by the grey road — a straight shot that stretches out until it disappears at the base of the Southern Alps. Mt. Cook is the star of this show. At 3764 m, it’s the highest peak in Australasia and it’s scraping the sky in the distance as I pull over for photos of the first views of the rock.

Cars and motorbikes and camper vans and German cyclists fill the roadside attraction, a lane designated for parking so as not to disrupt the highway traffic. Cameras come out and the first views of the mountains get recorded. Frames of film fly by. People jockey for position in the lineup of cars. It’s 22oC/74oF but the wind is howling.

I set my glasses on the roof of the car and move forward to shoot from the fields of lupen, with their blue and purple and pink and white flowers. I need another lens. Back to the car, I head for the trunk. The roadside gravel is large and colourful and noisy underfoot and my hiking shoes have thick soles and are laced tight.

I never saw my eyeglasses blow off the roof of the car. I never heard them hit the gravel. I never thought of looking down as I walked back to the trunk. I never saw the glasses on the ground. I never even felt them get pulverized under my feet as I made for the trunk. They never stood a chance.

But at least the sky was pretty. And what followed were two “day of the year” days hiking around Mt. Cook.

Was that the inevitable karmic upswing after a crushing blow? Are two epic days in the Hooker River Valley the yang to the yin of personal destruction? Is this backpacker karma and how can I reign it in? What are the rules? What is the order of deeds done versus tolls extracted? And where the hell do I get off this increasingly expensive roller coaster? And why, on this trip, does it have a propensity to destroy all my eyewear?

Helen, my friend from Wellington (we met in Carcasonne, France in 2001) and my navigator on this little rolling circus, said that in her 25 years in NZ, only twice has she seen sheep being herded along the highway. That kind of postcard-perfect crap just doesn’t happen in the real New Zealand.

We round a handful of corners heading towards Mt. Cook and the road turns white. And black. And it’s moving. And baaaaahing. Sheep. Thousands of them. A veritable sea of wool is moving down the road towards us. 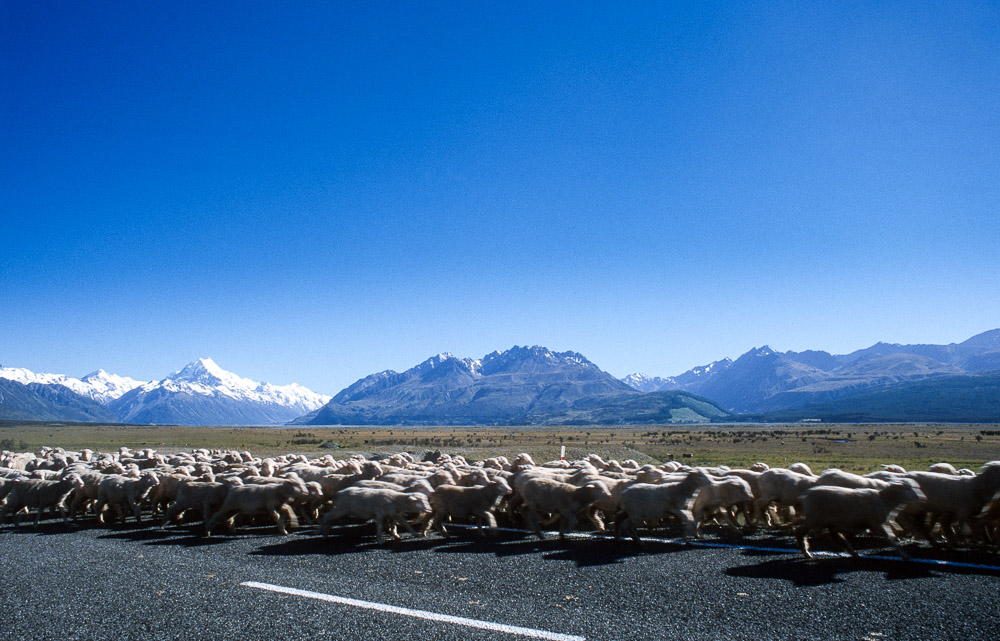 We round a handful of corners heading towards Mt. Cook and the road turns white. And black. And it’s moving. And baaaaahing. Sheep. Thousands of them. A veritable sea of wool is moving down the road towards us.There is a frenetic rumble as the herd flows past, all white and black and noisy and stinky. Only the sound of hooves on pavement is audible as I’m a boulder in a river of animals.

I slam on the brakes to avoid the production of copious ground lamb chop. I have to get out and shoot and instantly I’m surrounded by sheep. There is a frenetic rumble as the herd flows past, all white and black and noisy and stinky. Only the sound of hooves on pavement is audible as I’m a boulder in a river of animals. There are so many sheep that I finish a roll of film, rewind it, load another and watch still another thousand animals stream by. All with the highest peak in the country as a backdrop and without a cloud in the sky.

The herd passes, but I see one straggler on his back in a ditch beside the road. Is it hurt? Stuck? The sheep makes no attempt to get up. It just lays there, four legs straight up in the air. The herding dogs have passed but one rancher follows behind. I point out his stray and he calmly heads down the bank, grabs the sheep by its neck, flips it over, smacks it on the behind to get it in gear. The farmer moves on without a word.

Helen is laughing at the improbable odds of our woolen encounter. And the next day, a hundred kilometers away, it happens again. 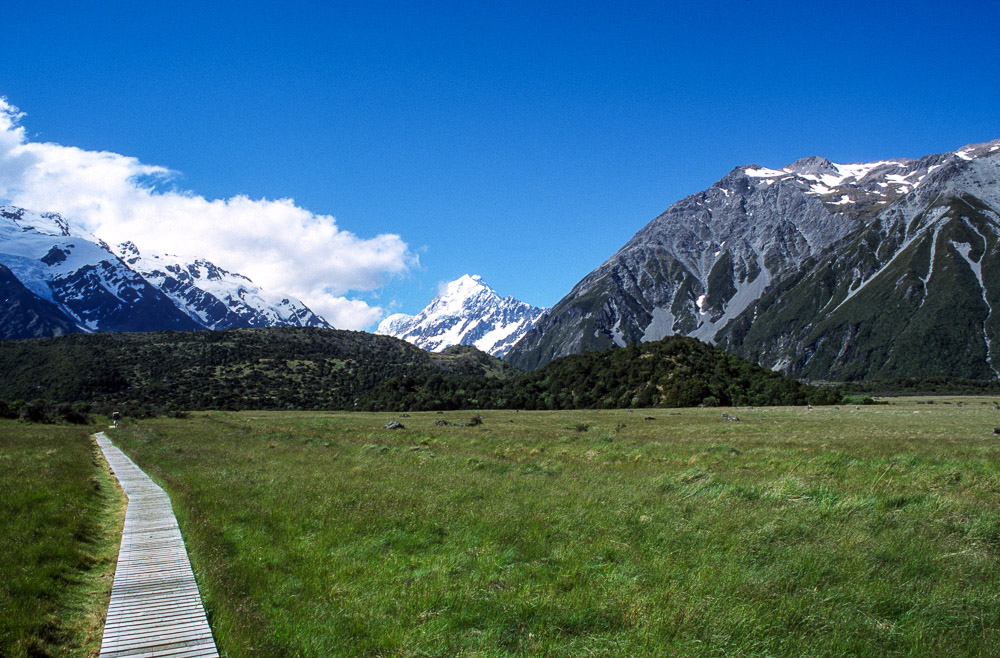 We reach Mount Cook in the early afternoon and set out for a quick but gorgeous two hour walk to Kea Point. The only hostel is full and the Unwin Hut is jammed to the rafters with climbers and their very serious-looking equipment, so we backtrack to Glentanner for a hostel, then return back to Mount Cook to eat at the only open restaurant for 75 km. After a dinner of a massive calzone and a handle of Red Rock ale, we loop back Glentanner and hope for the continuation of the incredible weather.

The few clouds that were bumping into the mountains have gone by morning. Two helicopters load hikers from a base beside the hostel and ferry them across blue skies of unparalleled richness and clarity. It even smells clean here. Mountains rise in all directions. Glaciers peer down on trees and fields and lakes and rivers. Sheep bleat in the distance. 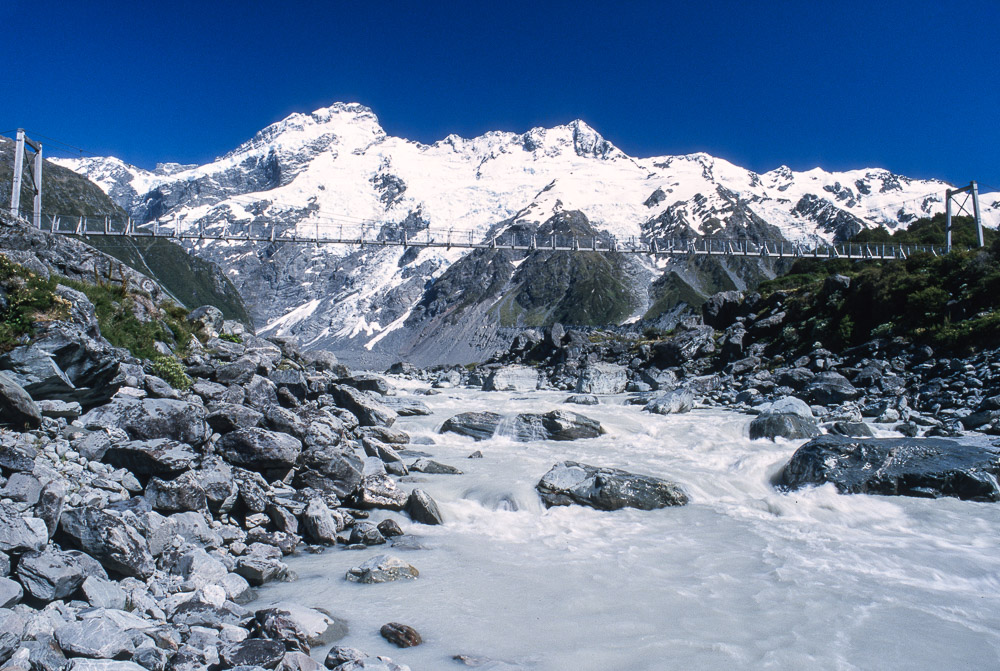 The Hooker Valley walk begins in extraordinary style and only gets better. Swing bridges over frothy, ice cold rivers. Colossal gorges. Sight lines to Mount Cook that leaves hikers’ jaws agape. What is supposed to be a four hour round trip is now at six hours, with no sight of the end of the trail. Mindful of the time, and our lack of extra minutes in our itinerary, we turn for the car, saving something for next time. The rolls of film are flying by.

The drive ahead is, if the maps are to be believed, onerous at best. With no direct route from Mount Cook to the West coast of the island, we must head south to Queenstown and go around the mountain range, then back north along the only road running up the southwest coast. It’s a long haul. But with an afternoon detour to Glenorchy, it’s a beautiful trip toward Milford Sound.