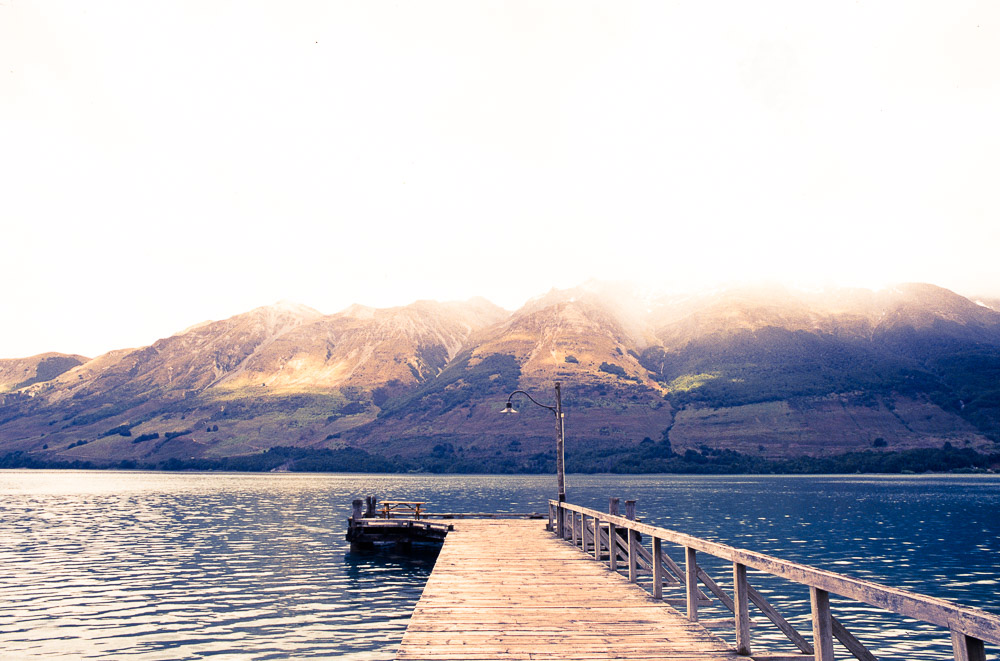 The site of the fifth highest annual rainfall anywhere on the planet, Milford Sound sees some 9 m (30 feet) of rain pour from the sky each year. And most of it seems to be coming down tonight.

After driving through places like “Devil’s Staircase Bluff,” so many rivers that they’re numbered rather than named (we just passed “Creek #160”), insanely perched little towns along the Crown Range Pass, I’m used to seeing highways barely holding their own against nature. Continual “slumps,” where the road has crumbled and fallen a few hundred meters down the hillside, are evidence of a changing terrain where fault lines push up some mountains at the geological equivalent of warp speed — over 1 cm per year.Milford Sound sees some 9 m (30 feet) of rain pour from the sky each year. And most of it seems to be coming down tonight. 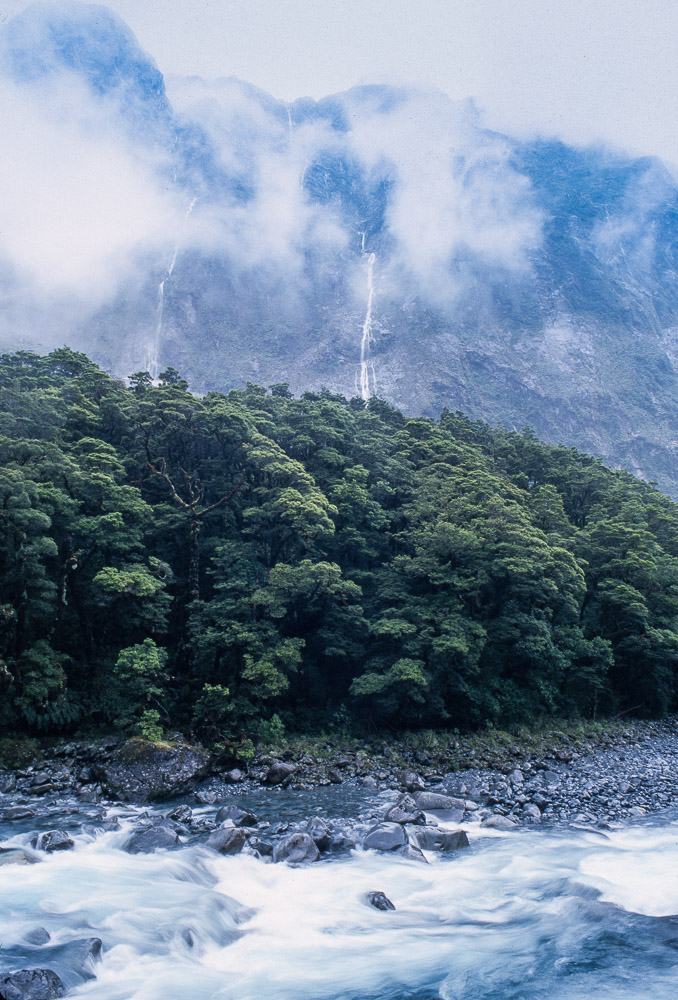 But the drive into Milford Sound is unlike any other, and not even because of the town names (“Thank You for Visiting Athol!”). Low hills of the Queensland area turn to grassy plains bathed in glorious sun, and fields of coloured lupen beside shallow, wide rivers. We pass 45 degrees latitude — the middle of Middle (and regular) Earth. And in the distance, dark clouds crowd high peaks. The temperature drops. The wind comes in brief gusts. Small drops of rain gather on the windshield. Once again, the road plunges into the hills.

Surrounded on all sides by vertical cliff faces of black rock, reaching thousands of feet straight up with huge waterfalls pouring out, photographing sights on the road to Milford Sound is like trying to take pictures in the shower.

Surrounded on all sides by vertical cliff faces of black rock, reaching thousands of feet straight up with huge waterfalls pouring out, photographing sights on the road to Milford Sound is like trying to take pictures in the shower. But during rainfall is the only time the waterfalls are active and visible, and I mentally check off another yin and yang of the trip. Every few minutes, we climb out of the car for more pictures and give up using our rain gear. We’re soaked and cold but can’t stop laughing at the incredible beauty of it all. It’s impossible to imagine surroundings so remarkable. Over 10 cm of rain comes down overnight. 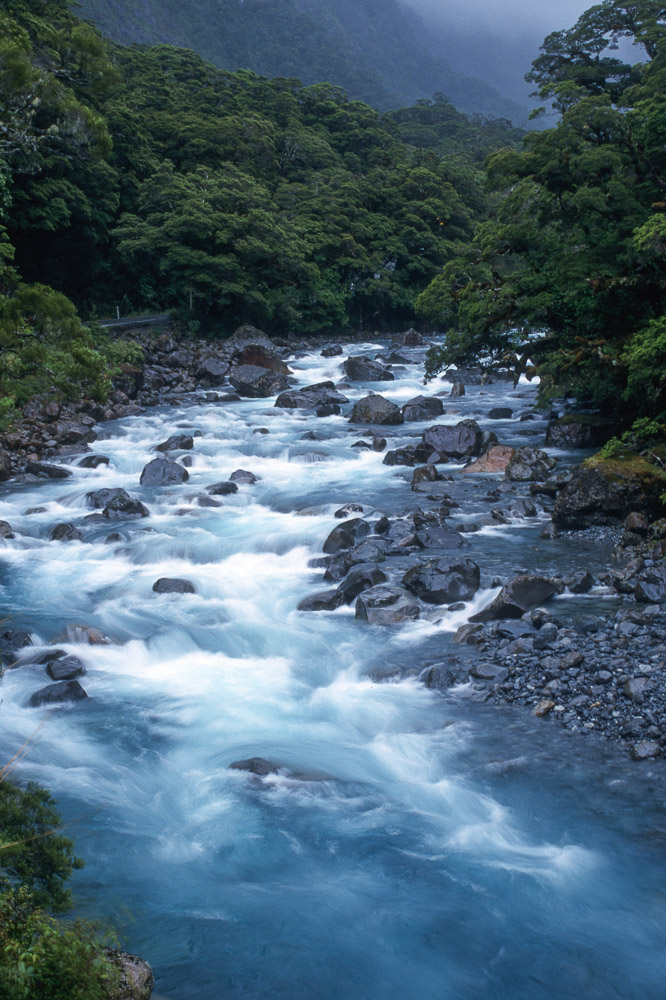 So much water falls here that Milford Sound has both fresh and salt water — the top 7 m of the sound’s water is the lighter fresh water, with the heavier, saline ocean water below. Even the roiling waves don’t disturb the chemocline and the result is an extraordinary variety of marine species inhabiting one location. Winter, says someone on the boat, is the only time the Sound sees blue skies. 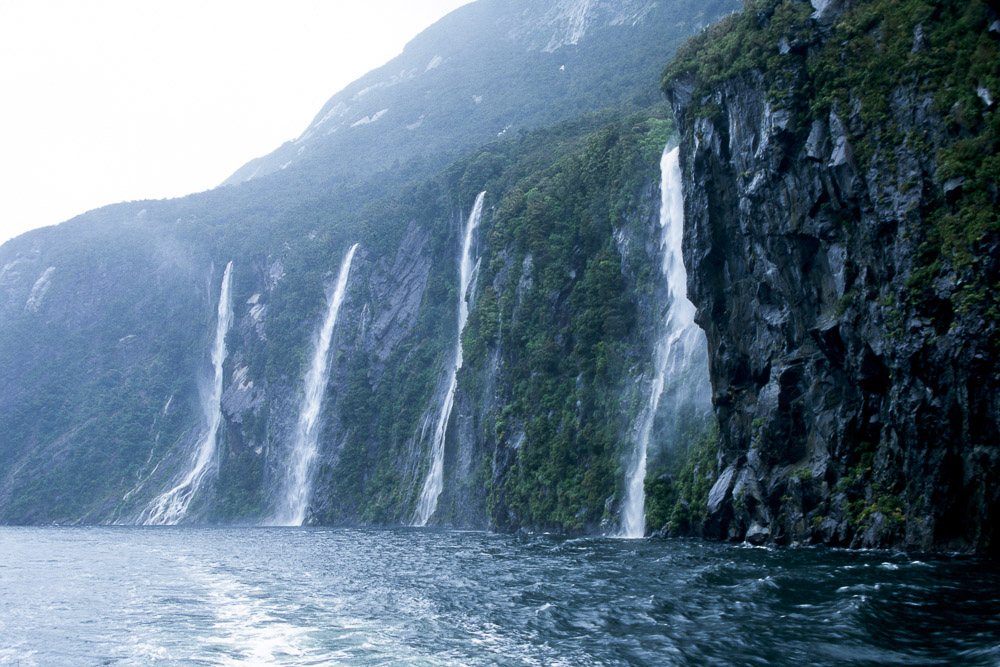 We pause to dock at a floating observatory and nature center. The outpost is like an inverted fish tank — a glass building submerged in Milford Sound that allows visitors to descend several stories below the surface and see the sound’s wildlife in their natural, undisturbed habitat. Displays and photos and a tour guide point out the creatures on the other side of the glass.

Back on the cold and windy deck of the tour boat, the sideways rain leaves me pining for Waiheke Island, my tropical xanadu north of Auckland. As I wring out my shoes back at the hostel, I vow to return to Waiheke before heading home, if only to reacquaint myself with the sun.